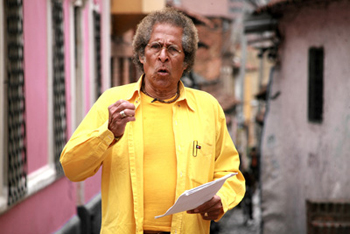 The exhibition presents the work of fifteen artists and collectives who explore the relationship between language and power, media, action, and socio-political context through gallery works, talks, workshops and performances. The exhibition takes its name from the title of a groundbreaking treatise by British philosopher J.L. Austin, who eloquently presented the concept of speech acts. He disavowed the notion of language as something passive that simply describes reality, but rather described it as a set of practices that can be used to affect and create realities. Austin’s premise is that speaking itself contains the power of doing.

Several pieces in the show relate speech to the urgency of the political process during an election season. Carlos Motta’s Six Acts: An Experiment in Narrative Justice (2010) reenacts a series of speeches concerning the concept of peace, originally delivered by six liberal Colombian presidential candidates from the last century who were assassinated because of their ideology. Performed by actors in public squares in Bogota during the last presidential campaign, the work emphasizes the transformative potential of fiction as a tool of reparative collective memory. Azin Feizabadi’s The Epic of the Lovers: God, Mafia and the Citizens (2009) muses on the disparity between individual and collective desire for change during Iran’s Green movement, written and photographed by the artist as he participated in the protests in Tehran. Melanie Crean’s The Anonymous Archives (2008-10), is an online archive of interviews that document the rapid shifts in Iraqi and American desire for pol itical change during the period of US military divestment, beginning before the 2008 election of President Obama, and finishing just after the current US mid-term elections.