For those that missed it: Rudolf Frieling’s talk is online now, too.

Talking points and links from today’s seminar, in chronological order:

Surveillance in Science Fiction. About how most things that were once science fiction are now here and in use. Plus a list of actual surveillance measures deployed right now.

“Thank you, animals, for being able to express how we all feel.”

“drones shouldnt be considered property, if i destroy them, it is self defense in 100% of cases, as a person with programming knowledge, I know you can program to do literally anything you desire for them to do, and since, by sight i cannot know what they are programmed to do, and yet at sight they may be able to harm me, i have the right to disable them, they are hazardous anima they cannot be of traditional perception of “property” .. when i can see them, they infringe upon me explicitly.”

These Shotgun Shells Are Made for Shooting Down Drones http://makezine.com/2015/08/19/these-shotgun-shells-are-made-for-shooting-down-drones/

new problems!  but what about robot rights?  https://www.schneier.com/blog/archives/2015/08/shooting_down_d.html

Drones that shoot back  https://www.youtube.com/watch?v=xqHrTtvFFIs

Basically these things exist in reality and have been used in war for quite some time now.
The Intercept – Drone Papers  https://theintercept.com/drone-papers

Eben Moglen: Time To Apply Asimov’s First Law Of Robotics “A robot may not injure a human being or, through inaction, allow a human being to come to harm.”  http://www.forbes.com/sites/andygreenberg/2012/06/26/eben-moglen-time-to-apply-the-first-law-of-robotics-to-our-smartphones/

“Inside a Startup’s Plan to Turn a Swarm of DIY Satellites Into an All-Seeing Eye”  http://www.wired.com/2013/06/startup-skybox/

Introducing SkyNode  – yes let’s try and order this for seminar use: http://www.skyboximaging.com/products#access
In the end, the aim is to have a live street-view. Example full-HD videos:  https://www.youtube.com/watch?v=BsW6IGc4tt0&index=1&list=PLIIuwfzJSzET1C0KDpA5FZrHLlDGfcHr3

The discussion strayed into Big Data territory (even though we try to concentrate on aerial issues), so let’s have this excellent essay as a last point:

On occasion of the 65th anniversary of the Liberation of the Concenctration Camp of Auschwitz – 27 January 1945-2010, VideoChannel & A Virtual Memorial Foundation launched the “SHOAH Film Collection” (SFC) – an ongoing collection of art films and videos reflecting the topic of SHOAH, which is planned to become the basis of the future exhibition project “Draft Title: SHOAH” – http://dts.engad.org – at a later stage.

Thanks to Bojana Romic (Serbia) for being curator in SFC. 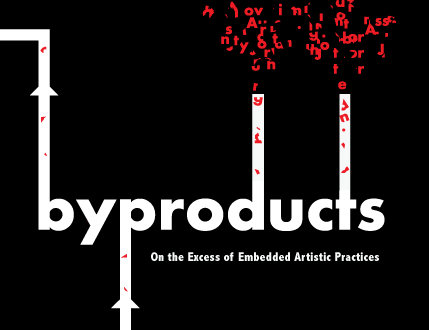 byproduct examines artist’s projects whose artfulness lies in building micro-worlds within other non- artworld systems. While parasitically reliant on the socioeconomic structure and symbolic order of other dominant systems, these artworks ­ or “byproducts” — exploit loopholes, surpluses, and exceptions in order to affirm individual agency and complicate the mechanisms of their dominant “host.” As pivots or turning points between art and other sectors, these works function as carriers for meaning across disciplines.

While responding to 20th century precedents that investigate the relationship between artists and industry, ‘Byproducts’ suggests these outlines and vocabulary for evaluating relevant analytic criteria such as the outcome, duration, retention of a critical voice, assimilation or reconciliation, etc. As a book responding to the emergent genre of ‘interventionism’ in contemporary artists’ practices, byproducts shifts focus away from the artist’s singular, anarchic gesture and instead towards the integration of art into everyday life.

DICTIONARY OF WAR is a collaborative platform for creating 100 concepts on the issue of war, to be invented, arranged and presented by scientists, artists, theorists and activists at four public, two-day events in Frankfurt, Munich, Graz and Berlin. The aim is to create key concepts that either play a significant role in current discussions of war, have so far been neglected, or have yet to be created.

DICTIONARY OF WAR is about polemics in various respects: It seeks confrontation with a reality that is characterised by the concealment of power relations the more that one talks about war and peace. But it is also about finding out to what extent war may function as an “analyzer of power relations” that constitutes current changes.

Changes that have been producing ever new wordings: The new war, post-modern war, global war, immanent war – all sorts of labels that indicate that the juridical model of sovereignty would seem to have had its day: war as an armed confrontation between sovereign nation states is a thing of the past.

While this still refers to conflict between different interest groups that are defined by the degree of their intensity and extension, unlike in the past war serves to regulate rather than destroy or renew existing power relations.

War is a “constitutive form of a new order” that no longer knows an inside or outside, that not only destroys but also produces life. In this new world order there is no difference between war and non-war: war is perpetual and everywhere.

So like so many other things these days, war too seems to be subject to a de- and re-regulation process that radically challenges old certainties and replaces them with new premises that shall not be questioned. DICTIONARY OF WAR sets out to oppose war and, at the same time, calls for “desertion” from a war of words in which facts are created with such force in their communication and propaganda that they can no longer be challenged.

“At least, when we create concepts, we are doing something.” The idea of DICTIONARY OF WAR, then, begins by referring to the theory of creating concepts proposed by Deleuze and Guattari: Concepts must be invented, created, produced; concepts refer to problems without which they would be meaningless. It is not about definitions, anecdotes, original opinions or entertainment, but rather about developing the tools with which to attain new ideas.

The concepts are created by conceptual personae, who are not identical to the author, philosopher, artist self, but rather testify to a third person beneath or beside. According to Deleuze and Guattari, “we do not do something by saying it but produce movement by thinking it, through the intermediary of a conceptual persona”.

DICTIONARY OF WAR is not a book in the proper sense. It is not about texts, deadlines or editing but about performativity. The concepts are introduced in alphabetical order by their conceptual personae in twenty-minute presentations.

There are no restrictions with regard to format. DICTIONARY OF WAR will be composed of lectures, choreographies, films, slide shows, readings or whatever format authors, actors, organisers and conceptual personae choose to use.

Finally, DICTIONARY OF WAR may well be a kind of war machine itself: the concepts are not intended to be deployed as means of control that regulate meanings, but which rather activate developments and processes and evoke events. “To draw speech to oneself and bring something incomprehensible into the world.” (Kleist)