… btw, looking forward to the upcoming CrypoParty @ Glasmoog on 26 November 2019, where we will have a workshop, exchange and conversations to emancipate from technologically conditioned powerlessness!

Here are some of the ways our unequal relationship with our smartphones is like an abusive relationship:

They isolate us from deeper, competing relationships in favour of superficial contact – ‘user engagement’ – that keeps their hold on us strong. Working with social media, they insidiously curate our social lives, manipulating us emotionally with dark patterns to keep us scrolling.

They tell us the onus is on us to manage their behavior. It’s our job to tiptoe around them and limit their harms. Spending too much time on a literally-designed-to-be-behaviorally-addictive phone? They send company-approved messages about our online time, but ban from their stores the apps that would really cut our use. We just need to use willpower. We just need to be good enough to deserve them.

They betray us, leaking data / spreading secrets. What we shared privately with them is suddenly public. Sometimes this destroys lives, but hey, we only have ourselves to blame. They fight nasty and under-handed, and are so, so sorry when they get caught that we’re meant to feel bad for them. But they never truly change, and each time we take them back, we grow weaker.

They love-bomb us when we try to break away, piling on the free data or device upgrades, making us click through page after page of dark pattern, telling us no one understands us like they do, no one else sees everything we really are, no one else will want us.

It’s impossible to just cut them off. They’ve wormed themselves into every part of our lives, making life without them unimaginable. And anyway, the relationship is complicated. There is love in it, or there once was. Surely we can get back to that if we just manage them the way they want us to?

Nope. Our devices are basically gaslighting us. They tell us they work for and care about us, and if we just treat them right then we can learn to trust them. But all the evidence shows the opposite is true. This cognitive dissonance confuses and paralyses us.

All welcome to our 5th Cryptoparty! 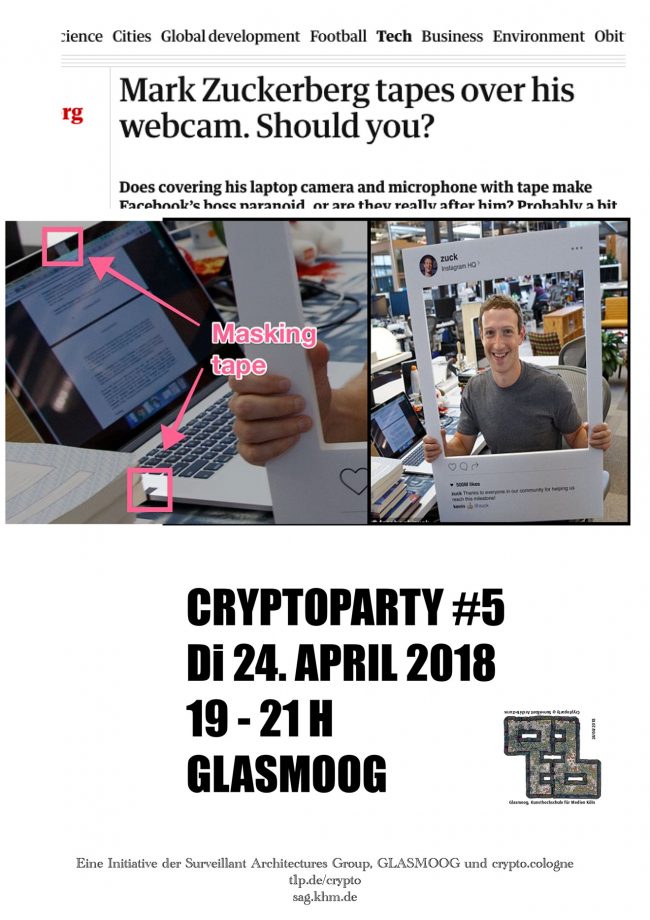 Our 4th Cryptoparty went really well. A full house and everyone involved learnt a lot. For notes and some quick links for an intro to digital self defence see https://tinyurl.com/cryptokhm

This week, in the European Parliament in Brussels, a “defense and security consultant” from a group called “Global Security Response” presented a new kind of solution to terrorism. Showing in a very clever way how the military approach to terrorism is failing.

I love the look of those spheres.

Here’s the entire presentation including slides. Some photos and the press release. More photos. The fake company website.

Tobias Flessenkemper is working on the issue of external and internal security policies of the European Union with a focus on South Eastern Europe and the European neighbourhood. He holds a M.A. of the University of Cologne in Political Science and a European Master in International Humanitarian Assistance of the Ruhr-University Bochum. Since 1996 he worked for international organisations in Brussels and South Eastern Europe and currently manages elbarlament.org an independent organisation working in the field of democratic governance.

More timely than ever, now that Germany again wants to retain everyone’s data.
Forward this to anyone who might need it…

The latest addition to the Electronic Frontier Foundation’s Surveillance Self-Defense series is a set of tools and instructions aimed specifically at LGBTQ kids, who have unique threat models (being outed) and adversaries (homophobic friends, parents, pastors).

Tips and tools to help you more safely access LGBTQ resources, navigate social networks, and avoid snoopers.
If you lack proper support and access to LGBTQ resources, this guide teaches you how to explore such resources online in a safer way to help avoid accidental outing to your peers, family, or online advertisers as a result of online tracking or nosy snoopers.

* An Introduction to Threat Modeling

* How to: Circumvent Online Censorship

* How to: Encrypt Your iPhone

* How to: Use Signal – Private Messenger

* Protecting Yourself on Social Networks

Sounds convincing. Liberty is losing out against security and comfort. Basically, people want what rich people have, and rich people have no personal privacy. They are surrounded by servants who know everything about them.

Paul Krugman argues that we’ll give up our privacy because we want to emulate the rich, who are surrounded by servants who know everything about them:

Consider the Varian rule, which says that you can forecast the future by looking at what the rich have today — that is, that what affluent people will want in the future is, in general, something like what only the truly rich can afford right now. Well, one thing that’s very clear if you spend any time around the rich — and one of the very few things that I, who by and large never worry about money, sometimes envy — is that rich people don’t wait in line. They have minions who ensure that there’s a car waiting at the curb, that the maitre-d escorts them straight to their table, that there’s a staff member to hand them their keys and their bags are already in the room.

And it’s fairly obvious how smart wristbands could replicate some of that for the merely affluent. Your reservation app provides the restaurant with the data it needs to recognize your wristband, and maybe causes your table to flash up on your watch, so you don’t mill around at the entrance, you just walk in and sit down (which already happens in Disney World.) You walk straight into the concert or movie you’ve bought tickets for, no need even to have your phone scanned. And I’m sure there’s much more — all kinds of context-specific services that you won’t even have to ask for, because systems that track you know what you’re up to and what you’re about to need.

Another essay that argues that we have entered recursive hall of mirrors of seeing and being seen, and what that means to how we will develop in future. Reminds me of the analogy between privacy and undeveloped film – you need a part of yourself that’s not exposed to light (yet), if you want to be able to retain your integrity as a person:

Daniel C. Dennett and Deb Roy look at our loss of privacy in evolutionary terms, and see all sorts of adaptations coming:

The tremendous change in our world triggered by this media inundation can be summed up in a word: transparency. We can now see further, faster, and more cheaply and easily than ever before — and we can be seen. And you and I can see that everyone can see what we see, in a recursive hall of mirrors of mutual knowledge that both enables and hobbles. The age-old game of hide-and-seek that has shaped all life on the planet has suddenly shifted its playing field, its equipment and its rules. The players who cannot adjust will not last long.

The impact on our organizations and institutions will be profound. Governments, armies, churches, universities, banks and companies all evolved to thrive in a relatively murky epistemological environment, in which most knowledge was local, secrets were easily kept, and individuals were, if not blind, myopic. When these organizations suddenly find themselves exposed to daylight, they quickly discover that they can no longer rely on old methods; they must respond to the new transparency or go extinct. Just as a living cell needs an effective membrane to protect its internal machinery from the vicissitudes of the outside world, so human organizations need a protective interface between their internal affairs and the public world, and the old interfaces are losing their effectiveness.

The Around the World Conference is an experiment that brings together a research dialogue without the environmental cost of traditional conferences. Institutes and researchers are invited to participate either through presenting or by joining in the discussion. The conference is live-streamed world-wide and archived after the event. 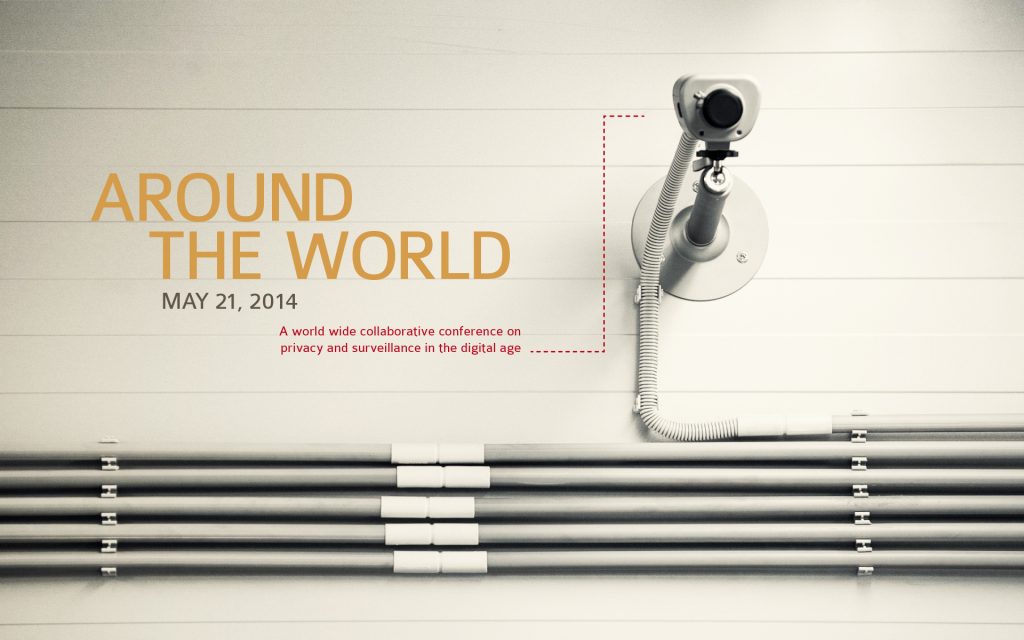