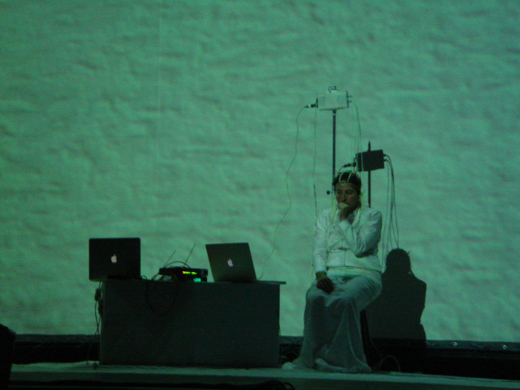 INsideOUT -Performance using an electrocephalogram and real time media.
This performance is about the materialization of the performer’s thoughts and feelings on the stage. In the performance, imagination becomes spatial. The stage is a place for the appearance of the invisible. Yasu Ohashi says: “the actors aim at our senses, our body and our unconscious and not at our intellect. Their gestures try to envision THE INVISIBLE WORLD.”
The performer, who is surrounded by sound and images, interacts with them using an EEG (electroencephalogram) interface, which measures the performer’s brain activity. Those sounds and images -already stored in the computer- are modified consequently by the brain data via MAX/MSP-Jitter. Hence, the performer determines how those combinations will be revealed to the audience. Images are projected to a screen and also onto the performer, while sounds are projected in surround.

This project was developed during an artist in residence at the Kunst und Medienwissenschaften Department of the Academy of Media Arts in Cologne (Germany).